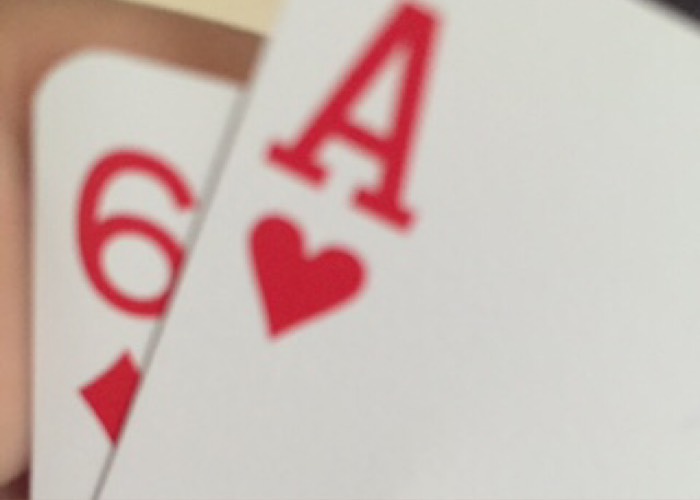 Last night, we went to play a low buy-in tournament at the local card room.  I know what you are thinking.  And you are correct.  I rarely play tournaments, and am not a big fan of them.  Tournament poker is a different game altogether, and it’s a game that A–I don’t really like, and B–I am not very good at.  Nonetheless, we both needed to get out of the house, and I let my sweetheart pick.  She has caught a little case of the poker bug since meeting me and felt like playing.  So off we went.

Action folded to me in the SB and I looked down at A♣A♥.  I rarely raise from the SB in blind versus blind situations and decided to just limp here as well.  My opponent surprisingly knocked the table.  Flop 4♣ 8♦ Q♦.  Good flop for me.  If he has any pair he will jam.  I checked.  He checked.  Ugh.  Turn A♦.  Wow.  I checked.  He checked again.  River 4♦.  I’ve got a full house.  Check.  He bet about a third of his stack and I moved in.  He tanked and tanked and finally folded the J♦.  Those of you that know me, know that I rarely ever slow-play big hands.  It felt like this was a good spot, and I did get more than I would have.  A few hands later he was out of the tournament.  Three remaining, and one was very short.

It didn’t take long to get to heads up.  I raised with K9 and the short-stack moved in with 89.  I won.  Down to 2 players.  I had my opponent slightly out chipped, and he was still upset and muttering about me raising 7 out of 10 hands when I was short.  He was an older gentleman and they just don’t like all that raising.  I knew if I picked up any sort of hand he was going to look me up.  Three hands into heads up play and it happened.  He raised from the button (SB) and I shipped it with A♥6♦.  The same hand that I led into the field when my sweetheart got eliminated.  He snap called with Q9 and I won first prize!