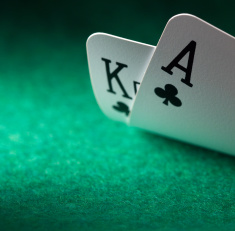 What a crazy game!  We played for 20 hours, yes, TWENTY hours!  Unlike last month, we were able to start right on time at 1pm and filled up almost immediately.  The action was smooth and fast, with no players holding up the game.  I played from 1pm until 10pm and had an up and down session.  We were 10-handed at 2pm, and stayed that way until the tournament started at 7 oclock.  Four of us kept playing until players busted out of the tourney and we were able to fill up again.  At 9:00, the Omaha game was full and it forced me out, but I immediately was able to start the Hold’em table.  That filled up an hour later and I was on the sideline, watching.  Let’s take a look at a few key hands from the early Omaha session.

I won the button to start the game and chose Omaha.  Nine hands later we switched to Hold’em in the round of each game.  The first hand of hold’em saw my stack disappear.  A loose-aggro player raised from up front to 15.  A couple of players called and I made it 75 on the button with A♣ K♣.  The initial raiser re-raised to 300, and I moved in.  The board ran out with no help and he tabled Pocket Kings for the win.  “Chips!”  I could have folded the AK and thought about it briefly.  Against anyone else it is a clear fold, but this player is capable of four betting with a wide range of hands, some of which I beat.  Oh well.  It didn’t take long for me to win my buy-in back and even more.

A series of three hands against the same opponent (we will call her White) proved very profitable.  The first, an Omaha hand that I raised preflop to 30 with A♣Q♣J♠8♠.  The flop brought Q♣J♥4♠.  I bet and got called.  The turn was a horrific 9♥.  I checked, she bet, and after pondering a while I decided to fold.  I was quite sure that she bluffed the board change, but the pot was relatively small and there would be better spots later.

Later came about 30 minutes later when White raised in mid-position to 25 in Holdem.  One player called and I called with 2♣5♥.  The flop was 9♣9♥5♠.  White bet 25, player called, I raised to 75.  White called, and the straggler folded.  The turn was a 4.  White checked, I bet 90, White mumbled a bit and folded.  I scooped up the pot and began stacking the chips when she said, “You bluffed me on that one.”  I chuckled, “Come on now, I had the best hand.”  She retorted with, “Did you have a Nine?  I had a big pair.”  After a few exchanges, she knew I bluffed her and she admitted to bluffing the board change in the Omaha hand a few minutes earlier.  She claimed, “We are even now!”  However, I had other thoughts.  About 45 minutes later the same scenario arose in Holdem.  She raised to 25 in mid position, I called with 4♥6♥ on the button.  This time the flop came very favorable:  4♠4♣8♥.  I played this the same way as the previous hand when I bluffed.  The turn brought a 6♠, giving me a full house.  White checked, I bet the same 90 that I bet with the Deuce-Five just a few hands before; she moved in her whole stack and I snap called.  She muttered some R rated language and ordered more chips.  We have a good friendship so it was all in fun, but she was not happy!

The first Omaha session brought me a small win, however, I got back into the game in the wee hours of the morning.  Fatigue, bad luck, and non-optimal play stole my winnings from me. Oh well!  A twenty hour game is never a bad thing!  I can’t wait until next month!  I also captured some players for my new home game later in the month.  See y’all next time!   Click the picture below to order the same cards that we use for all our games.

$300 Giveaway Question: Located in Cambodia, name the largest temple in the world.