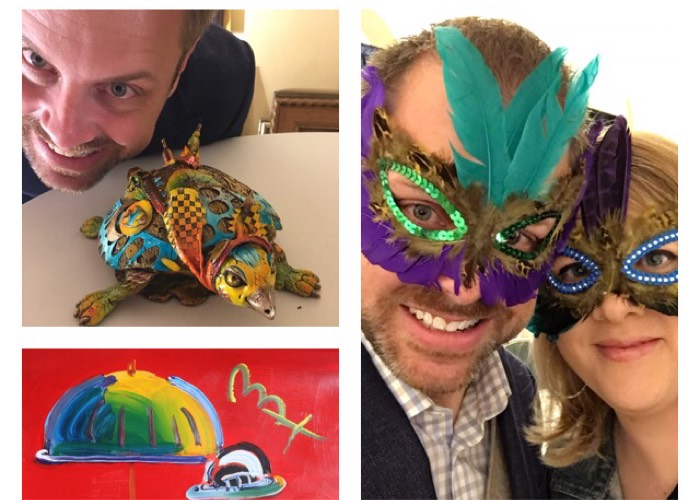 If you recall, a few months ago we went on a cruise, found an art auction, and…um…I went a little nuts.  So nuts that the gallery invited the suckers (us) to a land event, all expenses paid, 3 nights, all food included, drinks included, to a VIP art show and auction.

“Ok babe, let’s go, but we aren’t buying anything.  Seriously, nothing!”  Yeah, that didn’t work out. But we had fun!

We arrived at Hotel Galvez in Galveston, TX on Thursday.  What a great place!  Yes, it’s over 100 years old and haunted, but it’s awesome.  The meet-and-greet dinner was that night, and the food was quite tasty–we were pleasantly surprised.  We met the auctioneer for Park West Gallery, a funny fellow from the UK who recently became a US Citizen.  Very neat I thought.  His staff was superb:  knowledgeable, helpful, and very nice.  I mean, after all, we are VIP art suckers!  They better be nice!

The next day we met the world’s most famous living artist, Peter Max.  If you don’t know him, just Google.  He has painted for all the living presidents, the Olympics, Super Bowl, World Cup, World Series, US Open, etc etc.  So many things.  And his artwork is spectacular.  See the Umbrella Man in the opening pic…yeah…we got that, an original, not a print!  I can’t wait until it arrives!

Later that evening we had dinner, and met another great artist–Viktor Shvaiko.  While Max’s art is pop culture, Shvaiko’s art is sheer beauty–they look like postcards from Paris and Venice.  The amount of detail is amazing.  Google him, please–and if you can, buy his art!  His works are…just…breathtaking–like you are IN the painting.  However, after spending over our limit (of $0) we could not purchase.  We decided to skip the auction on Saturday and head out to explore.  Island exploration is another topic…so come back later for our adventures!

Later Saturday night, we attended dinner with another famous artist–Simon Bull.  He did a live painting for us—actually four paintings at once using a roll of paper towels as his brush!  Whaaat?!  (See the video at the end of this post.)  He later told us that he came across that technique by accident.  He was painting in front of an audience and his brush became unusable…not wanting to stop, he grabbed the nearest thing to him, a roll of paper towels, and finished!  Oh my!

Sunday morning, we had an early breakfast with the group and Simon Bull.  We got our picture taken with him and he signed his book for us.  Also, we were one of six lucky art enthusiasts to win a bottle of wine that Simon painted on and signed!  They drew our ticket right out of the hat…so awesome!  It was a great trip and I am so glad

that Park West invited us.  They did everything right, and if you ever get a chance to go to one of their auctions, be it land or sea, DO IT!  We walked away with two pieces of art, an original Umbrella Man by Peter Max, and a beautiful painting on metal by Michael Cheval, signed and dedicated books by Peter Max and Simon Bull, and of course the bottle of wine!

Thank you Park West for a great weekend, and thank you Hotel Galvez for hosting. I can’t wait for the next event!