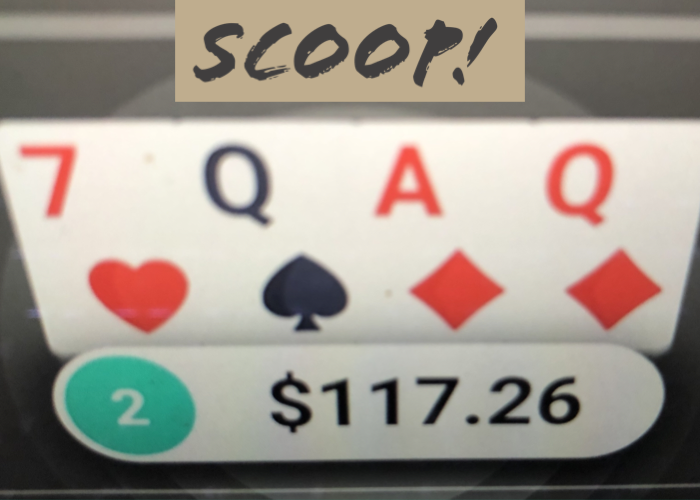 Another morning in Riga means more hot tea and online Omaha Hi Lo.  I’ve substituted tea for coffee while in Latvia, and I think my body likes the change.  Although, I do miss the flavor of coffee, there is no pot in our Airbnb.  There is, however, I fancy espresso machine that I have no idea how to use.  I’ll stick with the hot tea for now.  The weather is perfect for it.  Want to know what else the weather is perfect for?  Crushing the suckers at PLO8 online!

I sat down with $100 and battled him heads up for 7 hands or so, and then we were joined by yet, another sucker.  $50 buy in.  We played three handed for a while, and I was picking up small pot after small pot.  I increased my buy in by 20% when finally a real hand took place.  I was able to get the Omaha video replayer to embed here, so enjoy the video at the bottom of the post.

The hand starts with me in the BB with AQQ7.  Not the premier Hi-Lo hand, but I’ll gladly defend here when the button opens to $3.50.  We flop the nut flush draw, an overpair, and a 71 low draw.  Not that it is profitable to draw to 71’s, but in a 3-handed game, it’s just enough back up.  I checked the flop and the button potted it.  I make the call.  These guys will go nuts with A23x, top pair+A2, and array of other hands.  Usually, in this spot, you would expect him to show up with AA2x.  And he will occasionally.  But we aren’t giving up just because he bet once.

The turn pairs the board and we check again.  We are really hoping to get a free card here, but, I had made up my mind that I wasn’t folding.  There was a good chance my Queens were good, and if not we had the nut diamond draw, an emergency low draw, and we could spike a Q if needed.  Our villain did not check.  He potted it again, I elected to ship it in.  You’ll have to watch the video to see how the river played out.  Now, I am no dummy, I know that you know I won this hand by the featured photo.  But I have to hold a little something back so you’ll go watch!  Enjoy.