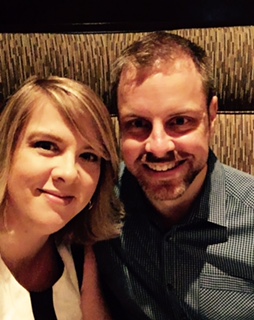 I began drinking coffee at a super early age, with my Memmie (my dad’s mom) at about 8 years old.  Oh, I couldn’t take it black.  “More cream, Memmie; and more sugar!”  The years went by.  Gradually I would take less and less sugar.  It was in my late teens where I settled on two teaspoons of cream, and one teaspoon of sugar.  Sometimes, on the weekends, my mom would “fix” my coffee.  Too sweet!  But I never said anything.  I was glad to have a mom that would do things for me, and I still am.  She’s the best.  I love you, Mom.

A few years ago, or maybe longer, I weened myself off sugar whilst having a cup of joe.  It was around the time I ditched powdered creamer after reading about how terrible it is for you.  So, milk only.  Just milk.  Enough to turn coffee from black to blond, after all, blondes ARE more fun!  I met the sweetest blonde of them all less than a year ago.  The first morning after the first night we spent together, she put a muffin on a plate for me.  I don’t know why, but that stuck.  That was the sweetest thing.

Many mornings came after that first one, and she just hated coffee.  She tried some of mine and the rejection of the precious bean-based drink was written all over her pretty face.  Another morning would come, maybe not the next morning, but a week later.  She would taste my coffee again, “Gah!”  One night, we were playing poker, and the waitress brought me a coffee.  My sweetheart tried it.  “This isn’t so terrible.”  Well, there was a little sugar in it.  From then on, she began trying coffee with loads of sugar.  I mean, I am not even sure what she was drinking could be considered coffee.

One night we stayed with my parents.  My dad takes his coffee black.  My mom takes cream and agave.  I take cream only.  However, there was some flavored creamer hiding in the fridge.  Susan found it and had a field day.  She loved her new creation.  She likes her coffee just like she is, super sweet.

Three weeks ago, I took her to the spot where we met.  I knelt down and pulled a diamond from my pocket and asker her to marry me.  With a few tears in her eyes she said yes, and made me the happiest guy in the world.  And now, every morning, we share a cup of coffee.  It is super sweet, just like my fiancee.  I’ll take sugar in my coffee now, forever, and wouldn’t have it any other way.

2 thoughts on “Sugar in my Coffee”